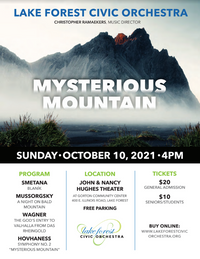 This October, the LFCO explores musical works inspired by mountains and majesty. One of the most well-known works in the repertoire, Mussorgsky’s “Night on Bald Mountain” is a terrifying depiction of the rise of the demon Chernobog over the Bald Mountain on St John’s Night. Richard Wagner used the mountains of Asgard as the setting for the Gods’ fortress, Valhalla, in his epic operatic cycle The Ring of the Nibelung. The mountain Blaník is such a significant landmark in the Czech landscape that it inspired the finale to Smetana’s set of symphonic poems known as Ma Vlast (My Homeland). And Armenian-American composer Alan Hovhaness has an entirely different take on the mountains in his Symphony No. 2, Mysterious Mountain, which combines meditative serenity and a driving energy.